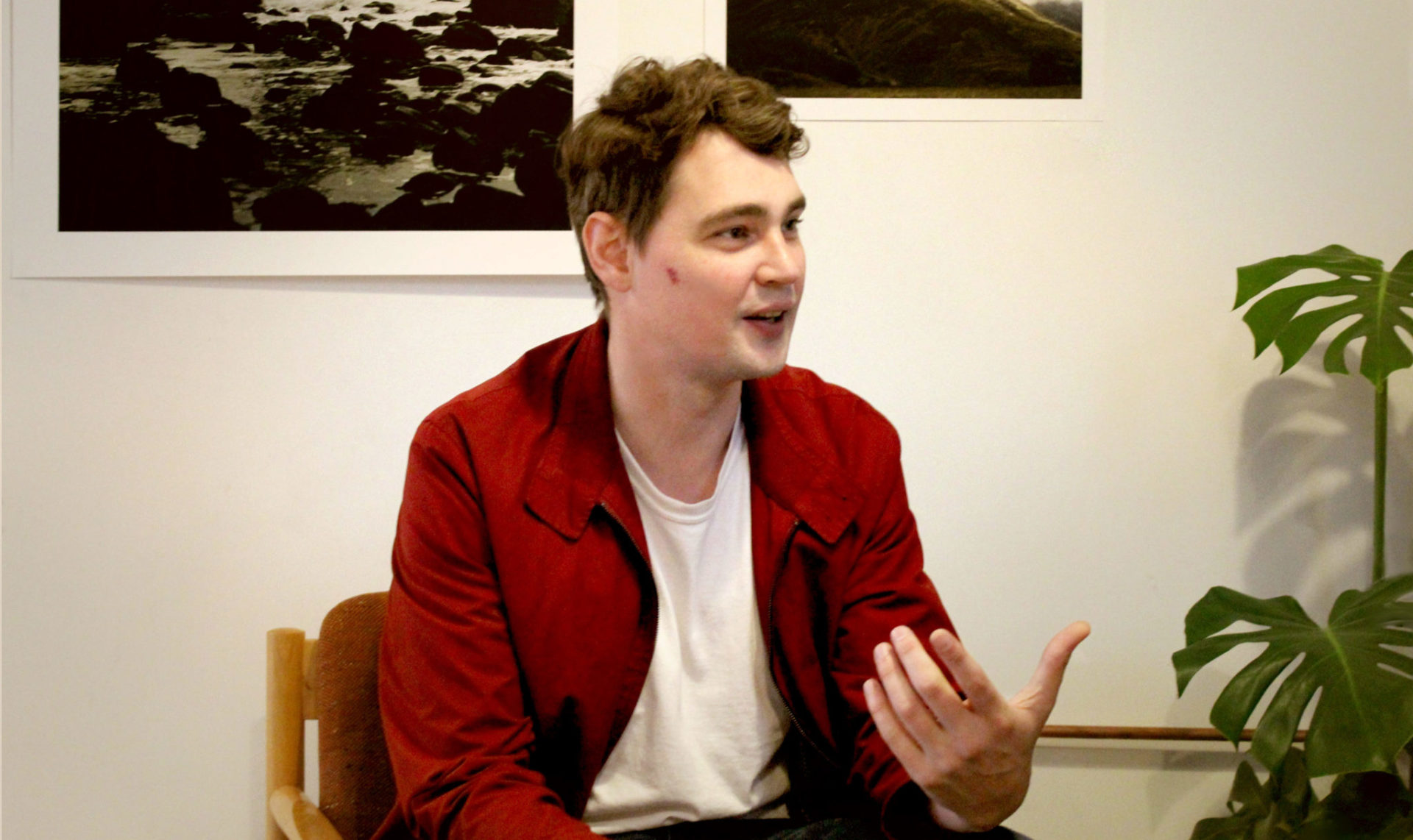 The John Byrne Award caught up with Edinburgh-based filmmaker, Callum Boath, to discuss his award-winning entry, Steve Burnett – Violin Maker, and the values which inform his work.

JBA-How did you meet the subject of your film, Steve Burnett, and what attracted you to making a film with him?

I met Steve Burnett when I was filming a creative mornings talk; he was discussing a set of violins that he had made for world amnesty day, with the message of world peace. This was a perfect introduction because I had all the information about his practice, prior to even meeting him! I then spent ages editing the film, and by the end of that process, you really feel that you know someone. Steve and I are very similar in our passion for reducing climate change, but Steve is very much hands-on, in the way he tries to express this. It was at that point that I thought, if I even made a film about somebody making a violin, that would be visually beautiful anyway, but then with Steve’s added emphasis on sustainability and climate change, I felt there was so much more to film.

JBA-You chose to title your work, ‘I agree, we agree, but do they?’ – Can you explain your choice of words? And how should we move forward when people don’t agree?

The phrase, ‘but do they?’, could actually be a bit misleading. It’s a question that I totally believe in, but it is hard to pinpoint who ‘they’ are. There’s no one person or industry that we can automatically point to and say, ‘these are the people who don’t agree’.

We are lucky to live in Scotland; the Scottish Government has very ambitious and world-renowned climate-change and carbon-reduction targets, and I think we’re seeing a huge movement for climate action in Scotland.

As this movement continues to gather momentum, you start to notice certain people, who maybe don’t fully agree or are a bit lethargic about tackling the issues head-on, being swept up in the movement, nevertheless. So, I think the question ‘but do they?’ is actually referring to those people who might not initially agree but are beginning to be swept up in that campaign. And I think we will start seeing more and more people agree, as the movement continues.

JBA-You punctuate your entry statement with the line, ‘where words leave off, music begins’ – can you explain this choice of words?

So, this is something that Steve brought to my attention. It’s a quote from the German poet, Heinrich Heine, and I think it’s very pertinent to the entry statement. To me, it’s about this feeling of inertia that people get when they feel that their voice is being ignored; when you’re sitting there, thinking, ‘well, we’re all taking actions, but nothing’s happening on a broader scale’.

I think ‘words leave off’ when people simply become tired of speaking, or when their words are continually going unheard. When Steve creates his instruments, however, and plays them on these world-renowned stages, the message continues to be communicated – albeit without words.

That’s also why we had Steve’s music playing throughout the film, instead of just having a straightforward interview with him – to show this relationship between the words and music.

JBA-In your entry statement, you note that the values which Steve is able to express through his work, are not traditionally associated with his craft, what impact (if any) do you feel this has on Steve’s message?

I think that Steve’s message is his craft.

Without one you don’t have the other – so it’s very difficult to talk about them as separate things.

However, I do think that where the expression of values meets art, it starts to become something broader and more powerful than a straightforward argument. If Steve explained his values and his position in words alone – of course it would still be powerful – but when you combine those words with music and art, you start to see the message gather more momentum, attract more attention, and engage a much broader audience.

JBA-You call on big business to adopt a similar approach and express their personal values via their work, too. If your vision were achieved, what would it look like in practice?

JBA-And what do you think is currently stopping us from realising that vision?

There are so many harmful and non-sustainable aspects of our lives, which are almost completely accepted and unchallenged by society. Things like fast fashion, the meat industry and transportation are so entrenched in our society that we never stop to question them. However, I think the main thing that prevents us from achieving a more sustainable world is simply profit. No person or organisation, which is making a profit, will change unless they have to change. At this point, when large corporations do make a change to be more sustainable, it’s often seen as act of generosity and philanthropy – when in reality, what they’re doing is only the right thing.

JBA-The fact that you believe we would see a more sustainable world if corporations stood by the ‘personal values’ of the people within them, implies a rather positive outlook on the individual – would you say you have an optimistic view of people as individuals?

It’s easy to be optimistic when you surround yourself with likeminded people. Of course you have this sense of optimism, because the people that you’re with all think the same – whereas on a larger scale not everyone does. And that’s referenced in the written statement, in the very first paragraph; we sit in our own little bubble, we chat to each other. We all agree. But it’s not enough, and I suppose that’s where your words leave off, the music comes in, and you just try to reach people in another way.

So, I would say my first feeling is to be optimistic, but that I’m less so when it comes to the larger picture.

JBA- To what extent, then, do you feel that individuals can affect the practices of industry and big business?

I definitely think that the individual can have an effect on the group, and we’re seeing that more and more. The climate strikes, of course, are a big example, but also with smaller things, individuals are starting to take steps to move away from things like fast fashion, and wasteful companies and habits.

It’s about how individuals spend their money – as I said before, it’s about finance, and individuals definitely have the power to change things as consumers.

JBA-What values guide your practice? And can you remember how or why you came to hold these values?

I used to work for an energy company (while trying to be a filmmaker at the same time) and I became drawn towards working with people who couldn’t afford their fuel bills – people in fuel poverty. Inadvertently, I began a career in that sector, working for Home Energy Scotland in community engagement. I was going out and speaking to people about renewable technologies and different ways that they can save money on their fuel bills and things – and this experience is hugely reflected in my practice now. I love going out and hearing peoples’ stories and finding out where they fit into their settings. My approach to filmmaking is still very much influenced by my time working in that sector and the values that I gained there; I find that I’m still drawn to making films with charities and in the third sector because that’s really where I see my own values reciprocated.

JBA-Do you feel that you have learnt anything from making the film with Steve?

It has changed my approach to filming; I love that there are no external influences in the film with Steve, to distract from him and his message. The film is entirely self-contained, you have Steve introducing it by playing the violin, you see him physically creating the violins, and then you move on to his studio, where we conducted the main interview. Even the music comes organically from within the film itself, rather than being added on top to suit the footage. In fact, I’m hoping to do something similar again, in a film I’m making with The Forget Me Notes, a dementia choir, which uses music to help people with dementia access memories.

JBA-The joy that Steve takes in his craft comes across very clearly in your film – what do you enjoy most about your creative practice and how does this affect your output?

I just like sitting across from people and hearing their stories; making somebody feel comfortable enough to give you an insight into their lives and their world, and then presenting that in a way that they are happy with, but that they might not expect. Often, people don’t fully realise the impact they’re having because that’s just their everyday life, that’s just what they do. Using their own words to bring this to life in a new light, really brings me joy.

JBA-And so what was Steve’s reaction to the film?

He really was happy with it, especially the scenes where he was working; because when you’re in the middle of a craft like that, you necessarily don’t see the beauty of it. As I mentioned before, Steve has given talks on his practice, but it’s very different standing up in a room in front of lots of people, than sitting down and talking to someone one-on-one. And so, he was very happy with the way the interview was presented– and, of course, he was pretty excited to hear that the film had won The John Byrne Award!

Do you have something to add to the discussion?