What is my place in this world? 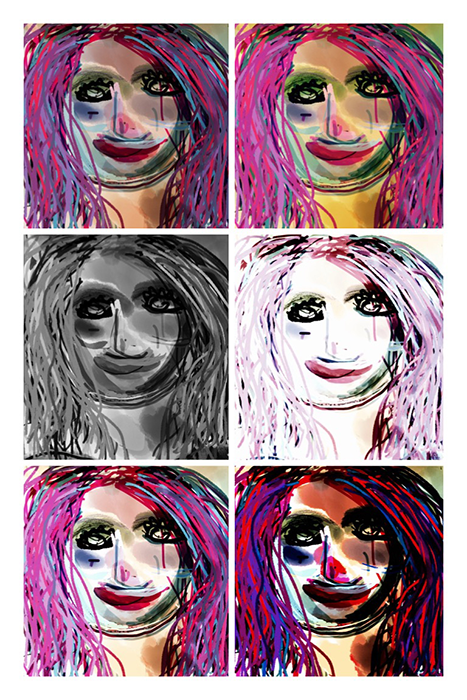 Imagine a 17 year old girl who has been diagnosed with cancer. Over the next 18 months, imagine the trips to hospital, the chemotherapy and radio-therapy. The lack of any surgical solution. The dwindling hope of survival. Her cancer is sited in her pelvis. The tumour presses on her nerves which causes huge pain and leaves the girl confined to bed for the vast majority of her time and on a cocktail of drugs to try and control the pain. That girl is Rebecca Dalgleish.
A year after she is first diagnosed, between July and August 2015 when she was 18, Rebecca created a series of self portraits. She knew she was dying. The works were drawn on a tablet when she was lying in her bed.
As Rebecca stares out at the viewer, how to imagine what is going through her head? The feelings of helplessness, of pain, of anger, but also of self. Of who this young woman was and how she thought of herself.
Rebecca died on 4th December 2015.

Created on computer tablet. Rebecca Dalgleish was my daughter. She died aged 18 in December 2015. In the months before she died she created a series of self portraits. I am submitting this artwork on her behalf.
The submitted work shows a panel of six of her portraits which she pasted together to build into a single image. The portraits show the same base image coloured and shaded in different ways. All show her face with hair falling onto her shoulders. At this stage the chemotherapy had taken Rebecca’s hair. There are five portraits in colour while a sixth is in monochrome.

PreviousCan we turn something damaging into something beautiful?
NextAre we prescribing ourselves prolonged pain?