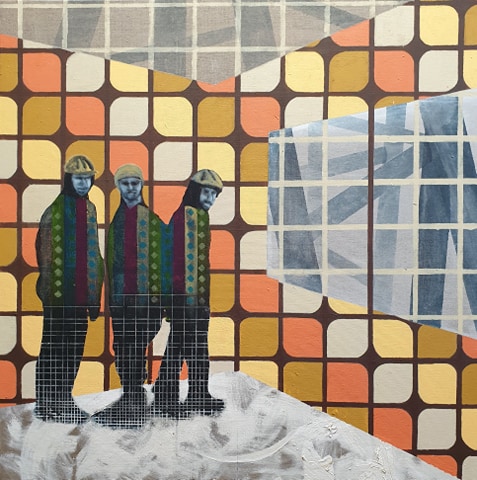 Previous entryDo you see the signs?
Next entryIs the battle of Banockburn still relevant in 2020?
July 2, 2020

This painting emanates from personal experience of the Oil Construction Industry in the early 1980s. Health and Safety concerns were minimal on some sites, conditions harsh, sometimes brutal. As the World moves away from Fossil based fuel sources, so too fades the cultures and subcultures within the oil industry, the language, storytelling, the sights and sounds of gigantic structures toiling in an unforgiving environment. In the 1970s and 80s numerous sites were active in Scotland, health and safety were variable and sometimes almost entirely absent. Aesthetically, some view the highly engineered behemoths of the North Sea as hopelessly brutalist, devoid of the normal delights associated with architecture. For me however they remain somehow wonderous, their genesis forged by human ingenuity, by a supreme effort, and at a cost in real terms in human lives. In a painterly sense, I strive to convey the human narrative, solid linear or structural marks are joined by more organic features, as happens in life and, as we live amongst the structures which surround us.