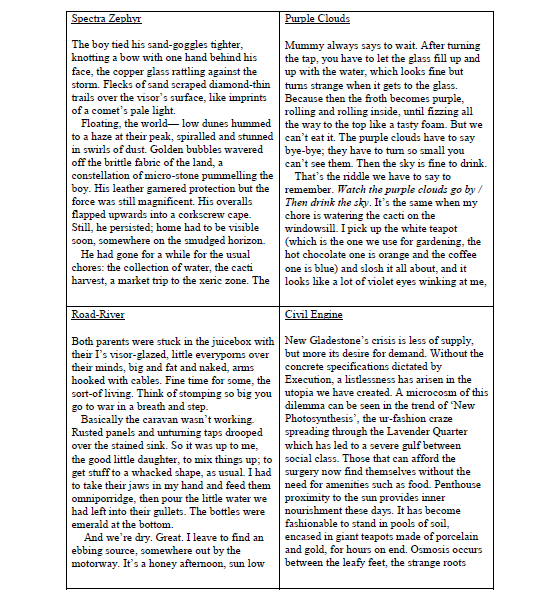 Are differing perspectives overwhelming, or a catalyst for radical communication?

A piece of experimental science-fiction/ergodic literature, “Laundry Laundry Laundry Laundry” explores what happens when multiple perspectives are perceived at once. In presenting four separate stories on a quarter of each page, I aim to present worlds (or is that several iterations of the same world?) where, despite crypticity and unnerving implications, a sense of political and philosophical union between the characters arise. Imagery, theme and language weave together, all under the frame narrative of a futuristic washing machine connected to parallel worlds. The four points of view (third-person, childlike, slang, report) initially cloy for the reader’s attention, eventually fading to one final scene of hope: the protagonist scooping a pool of light-as-water into their palm, the text surrounded by three white rectangles…

My biggest inspiration for the story was “Gorogoa” (2017), a puzzle video-game where four autonomous squares tell different stories. However, when uncovered or moved, they link together to create a complex and thematically rich tale of pilgrimage. Minimalist composers like Phillip Glass and Steve Reich also informed this work in their use of voice; that contemporaneous notion of theirs, of “pure art”, the musicality of language compared to conventional narrative, was also particularly interesting.

Why Do I Ask When It’s So Hard To Trust Compassionate Answers?

Can Grief Cause Psychiatric Disorders?

Can We Enjoy Life Better If We Don’t Take Ourselves So Seriously For Only A Moment A Day?

Will We Meet Again ?

Where Do We Find Solace?

Is This The Way Back?

Is Digital Connection Taking Away From Human Connection?

What Is It To Ghost?